Esther Bukholt was first introduced to TetraMap about 15 years ago during a workshop for Recreation Wellington, NZ (a division of Wellington City Council). For many years, she says, a senior manager championed the ideas of TetraMap as a way of better understanding each other and planning together. She was taken with the way TetraMap improved relationships between them all and decided to become a Certified TetraMap Facilitator, allowing her the opportunity to introduce the approach as a freelance trainer and facilitator to community groups.

Esther easily makes the link between TetraMap’s metaphor and its value of holism and applies it to living in harmony with the earth, each other and ourselves. As you read the post below, think about how recognising your impact on the earth can make a huge difference. How can the TetraMap model help us do this better?

Reinventing rubbish in our household began some years ago, when my husband and I decided that we could surely do better than putting a bag of rubbish out to the kerbside every week (average NZ households put out one a week). Being high in the Air Element, he suggested we do a rubbish audit. We would lay out all our rubbish for the week and see what it could teach us about how to reduce it.

As he is also a strong Water elemental preference, he suggested we do it together as a family. Luckily our girls were young enough to see this as an adventure. One daughter (Elemental preferences: Air and Earth), was completely fascinated by the science of it, and the other (Fire and Water) just couldn’t wait to see what was in our rubbish bin.

We chose a weekend with fine sunny weather (it blows a bit in Wellington so these things are important), placed a large plastic sheet out on the concrete path, pulled on plastic gloves, and laid out our rubbish for the week. We sorted it into piles and were shocked to discover how much we were throwing away that could be recycled, re-used, eaten, or never bought in the first place!

Together we brainstormed on a large sheet of paper all the changes we could make to reduce our rubbish. We decided to:

Making the changes together was fun and we’ve continued to maintain them for years. Our family of four, along with our dog and small business, now put out one rubbish bag every six to eight weeks. Our goal is five bags a year.

Really, there is so much more we can do with rubbish than bury it in the ground!
Esther Bukholt

Passing on the message 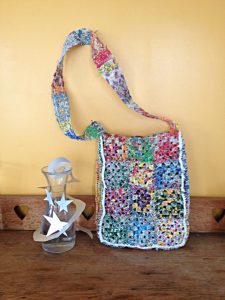 Our local community heard about our rubbish adventures, and we’ve ended up running some cool workshops at our local school. Later, parents told us about how their kids were completely changing their family waste, and recycling systems. These days, my favourite thing in the world is teaching people how to crochet amazing stuff out of old plastic bags. (There’s an example in the photo.)

Really, there is so much more we can do with rubbish than bury it in the ground!

A note from Esther

I have written up workshop plans aimed at young people which include role-playing at shopping and grocery stores, trips to the rubbish bin, acting as councillors, recycling stations, and posters, to help others get started on their recycling journeys. If you’re interested or want to learn more, please get in touch with me.