The creators on TetraMap’s influences

The evolution of TetraMap has been influenced by Ancient Chinese theories, Empedocles, Hippocrates, Marston, Jung, Herrmann, but most significantly, R Buckminster Fuller.

In the 1980s we looked at different typologies and synthesised our own version based on simple, neutral terminology that was easy to remember – Earth, Air, Water, and Fire. In the 90s we overlaid our model on the Buckminster Fuller-inspired tetrahedron, and branded it the Four Elements Tetrahedron Model (quite a mouthful).

In an effort to simplify, in 2000 we changed the name to TetraMap and also changed our graphic from four separate graphic Elements to a single continuous scene with all four Elements blending into each other, demonstrating inter-dependence. Inter-dependence is the defining quality of TetraMap which most people intuitively understand, but struggle with rationally as we are so used to polarised thinking like good/bad, strengths/weaknesses etc.

When presenting overseas, we always show the “real” map of the world with New Zealand at the top centre, to emphasise that any map is just an interpretation of reality and will always have some kind of bias.

We try to focus on behaviour rather than personality but we do like some of Jung’s concepts when we generalise them as metaphors.

The mask can be a metaphor for wearing different masks in different scenes or situations. In fact, the scene (and past scenes) will always influence the mask we choose at any point in time, so TetraMap does not try to establish any kind “true nature of the individual”.

Jung proposed that art could help with anxiety, fear, emotional stress, and we simply encourage the art of metaphor as a powerful way to help think things through – even for more mundane things like project planning. However, Jung’s Archetypes are just too detailed and deep to be relevant to TetraMap.

Although we avoid the terms “introvert” and “extrovert” because of the common association with personality, we liked Jung’s interpretation of being more internally or externally focussed (rather than being uncomfortable or comfortable amongst a group of people).

TetraMap’s origins are in studies of ancient philosophy that looked to nature as a reflection of behaviour. It also takes learning from the work of Buckminster Fuller (1895-1983) that looked to nature from a perspective of helping humanity solve global issues through his design science methodology. Based on the tetrahedron – nature’s strongest shape – the approach builds understanding of nature’s elements in a way that improves understanding of human nature.

Our simple terminology of the Elements (with capitalisation to highlight we mean metaphors) Earth, Air, Water, Fire, enable the model to be used not only for people and behaviour, but also as a generic chunking tool for breaking something complex into four related parts, or a set of different pieces into four related groups. For example, you can TetraMap any project or strategy into four parts: outputs, systems, culture, image (Earth, Air, Water, Fire). Also, you can TetraMap the values of an organisation to see how balanced they are among the four Elements.

Because the terminology provides a rich, multicultural metaphor, it has significant value as a common language in large organisations for people to develop inter-dependence, and also to provoke creativity for ecological, sustainable solutions. The holistic nature of TetraMap ensures you consider multiple perspectives instead of the polarising, strengths and weaknesses, black and white, approach.

The fact that TetraMap can be folded up into a tetrahedron reminds us that you can have four inter-dependent Elements with no opposites!

TetraMap founders, Yoshimi and Jon Brett discuss the origins and legacy of their creation.

Tetrahedron: “The simplest structure in [the] Universe.” 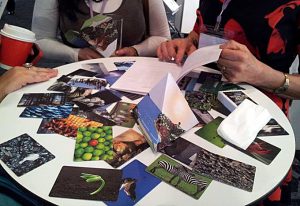 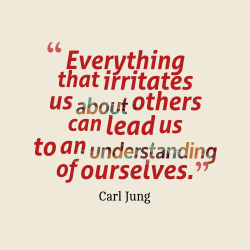